Amphibious Marine, Inc., a family owned and operated company, has been building hovercraft commercially since 1996.  The president/engineer, Bryan Phillips, has 33 years’ experience building and operating hovercraft.  Our craft have proven themselves on adventures as far as 1400 miles north to Alaska up the inside passage, 1800 miles on the Mackenzie River in Canada’s Northern Territory, in search and rescue applications, and for tourism operations running 7 days a week.

The history of our hovercraft begins in the 1960’s. Barry Palmer (born November 1937) is an American aeronautical engineer (UC Berkeley, 1961), inventor, builder and pilot of the first hang glider based on the Rogallo wing or flexible wing. 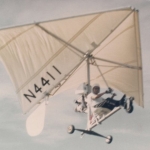 Palmer also designed, built and flew the first weight-shift ultralight trike aircraft (March 1967). He was also among a very few people experimenting with the air cushion vehicle, or ACV during the 60’s. 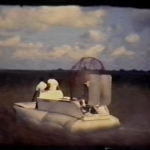 His first significant craft, “Smuggler” was built around 1968. He was also building airboats during this time as well, while living in Florida. 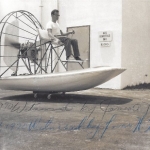 Mr. Palmer moved to Seattle about 1974 to take a job with Boeing aircraft working on a hydrofoil project. His interest in hovercraft, or SEV’s for surface effect vehicle, as he preferred to call them, did not falter. He continued his work improving his designs using his knowledge as an engineer, having worked on projects ranging from the lunar lander to rocket motors for the space program.

He started a business, Palmer Aero Systems in the mid 70’s selling plans for hovercraft. The first plans sold were for the Fantastic 1, a single person craft powered with an 11hp single cylinder Briggs & Stratton engine. 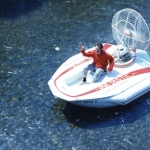 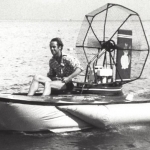 Barry even used the prototype to commute to his job at Boeing where he worked on the hydrofoil project. The Fan 1 design was very popular, and hundreds were built all over the world by people of all ages.

During the 1980’s Mr. Palmer began a program with larger craft built from molded fiberglass. The craft pictured are 16’x14’ and 18’x14’ and powered with air cooled VW engines. They were simply called the Red and Yellow machines. Much was learned with these craft, including the need for more cockpit space. They also had a manually folding skirt width extension system. Eventually this would be developed into the automatic extension system used today. 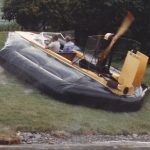 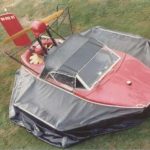 operation and low spray. Unlike many of his contemporaries who simply copied British designs, his craft were much quieter, owing to significantly better efficiency of the lift and thrust systems, as well as low skirt drag.

The DIY craftsmen also benefited from a very simple build using common materials, except for handmade laminated aircraft plywood fans and propellers, made by Barry. 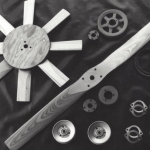 During the early 1990’s the newly re-branded SEVTec, for Surface Effect Vehicle Technology, began development of the Vanguard composite craft that utilized the new OHV V-twin industrial engines just hitting the market. Bryan Phillips entered the picture during this time and would build the first Vanguard 14 from the plans that followed, after successful trials. 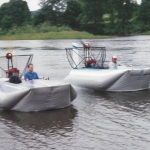 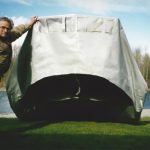 The Vanguard would prove to be even more popular than the original Fan 1, more than 500 have been built worldwide to date. New modern engines, better hull materials, improved propellers and fans, and decades of refinement with over 40 prototypes built lead to a series of five other new craft.

The Prototype, with just 16hp and the first 18hp, 14 foot unit successfully completed a number of long trips. 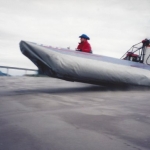 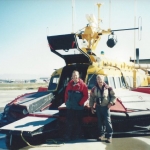 One round trip of 500 miles north from Monroe WA to Comox British Columbia through the San Juan Islands was particularly scenic. Another trip into Canada included a stop at the Canadian Coast Guard hovercraft base near Vancouver The one of a kind skirt system allows for great stability and good sea keeping in open water. 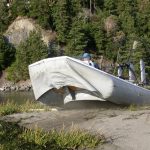 It would not be until the spring of 1998 that this craft would be completed, as Mr. Palmer and Mr. Phillips built the first Prospector SAR in 1997. 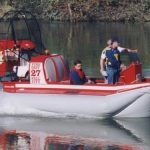 The hull and assembly of the Prospector SAR hovercraft took place at the new Amphibious Marine facility at Campbell Lake. 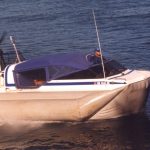 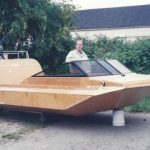 The craft was built for a local fire & rescue department near Seattle for flood rescue work.

Testing of the new Explorer 20 was well under way in the spring of 1998 when John Carter floated the idea of a trip up the “inside passage” to Alaska. After 70 hours of local operations and trip planning Barry, Bryan and John set out from Anacortes north, to Alaska in June. In total the trip would cover 1400 miles north to Juneau. 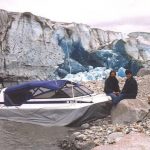 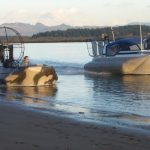 In 1999 work by Amphibious Marine began on tooling for a molded version of the Vanguard 14. This model helped build the new company for many years, more than 45 have been built. Eventually larger EFI engines became available that helped support growing customer needs for a complete cabin, heat, more payload and headwind capability. 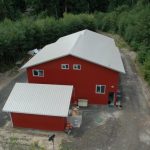 In 2005 Amphibious Marine’s hovercraft manufacturing facility needed to be moved. A search found proper facilities lacking in the local area. A new shop was planned and built, primarily by Bill Phillips, Angela Phillips and Bryan Phillips. The new shop was built with composite construction in mind, heated floor, ventilation and great lighting. 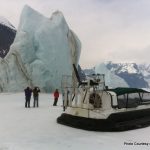 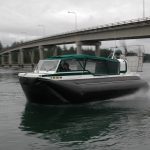 In 2009 after many Vanguards had been built at the new shop, a call came for an Explorer to be built. The Alaskan client indicated a preference for diesel power, cabin and of course heat. Finding a suitable diesel engine for a hovercraft of this size proved to be difficult. Finally, two possibilities presented themselves, Steyr and Volkswagen Industrial. The Steyr proved to be impractical at the time. The 84hp 2.0L VW industrial diesel seemed ideal, though a bit heavier than the Subaru gas engines used on earlier models. 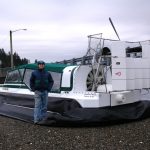 The size of the craft was scaled up to 22×11 to suit the larger diesel engine. This would be the first craft designed with help from 3D CAD software, Rhino 3D and Solidworks. Four of the Explorer 22 diesel TDi were built, until VW pulled its engine from the US market.

In 2014 work began on an ambitious new project, the Explorer 24, an all composite, vacuum infusion molded craft with a full hard top. The design called for a 12-passenger capacity, gull wing doors and a new 144hp Steyr marine diesel engine. With the addition of a CNC 6’x10’ router in the same year parts designed in 3D could now be cut with greater speed and precision. CAD/CAM capabilities allowed for shapes and design concepts not previously possible. 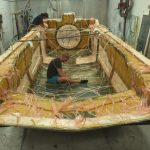 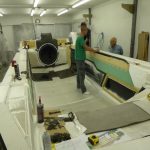 Vacuum resin infusion (video link) significantly improves laminate quality, design freedom with cored construction and reduces weight. The technique allows a relatively small crew to make large complex parts without concern for resin set times, as it is not introduced until the last step after all carbon, glass fiber and cores are placed. As an added benefit exposure to the resin smell is minimal, with it contained under the vacuum bag. Significant investments in tools, tooling and knowledge are required though. The result is a hull far lighter, stronger and more durable than a welded aluminum structure, used by many. 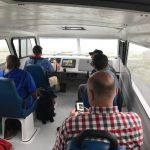 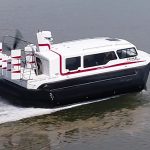